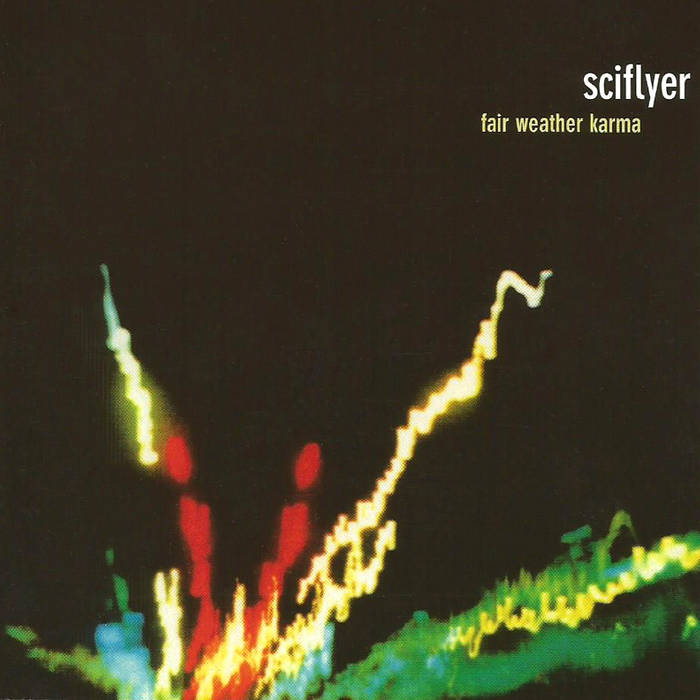 FraterOiram Amazing album from start to finish, satisfies my punk/shoegaze urges to the max Favorite track: Come Up To My Cloud.

Shortly after our feature last year on the contemporary shoegaze scene, our in-house attorney obtained an injunction barring the writers from using the term "nugaze" - no doubt to squelch any looming journalistic cliches. (Hey, try saying "post-rock" aloud now without snickering.) Just the same, if the, er, shoe fits, go ahead and lace that sucker up. California's Sciflyer is dead-square in that context; guitarist/singer Steve Kennedy previously played with Chris Streng of Stratford 4, and Sciflyer has shared bills with Magnet n**gaze faves S4, Voyager One and the High Violets. Present here are enough submerged vocals and atmospheric blissouts to keep a Creation Records convention hopping for an entire weekend. The band takes its name from a song on the first Swervedriver album, and "You're From the Ocean" could pass for a long-lost Swervedriver outtake. Sciflyer is no one-shoe pony, however. Former Rain Parade guitarist Matt Piucci helped with the recording, and subtle Rain Parade-y moments can be heard on "Like an Ion", a marriage of vintage jangle-pop and thick, dreamy psych. The churning "Burn & Sell" has a Ramones-meets-Who three-chord wallop that no amount of blurry/woozy guitar effects can dilute. Propulsive and visceral yet unerringly melodic, Sciflyer's debut is a juggernaut ride to the ravedown.


Sciflyer is upbeat fuzz noise with an energy that could take you dancing or just leave you on the floor, staring at the ceiling. Bliss-punk? The songs sound like they would be perfectly sugar-sweet pop if they were played clean, but this band is not about clean. Echoing, reverbed vocals drift a little Dean Wareham-like through some of the songs, even though they are speeding unstoppable into a vibrant sunset haze. There's a nice 11-minute Verve-ish track that floats across the middle of the CD, and then it goes into some beautiful and lifting/lilting guitar sparkle that makes me feel like I've just been kissed.


The debut album from this 3-piece noisepop/shoegazer act begins with the Helios Creed/Chrome-like psychedelic-garage-fuzz screamer 'Burn & Sell', then resolves to place itself firmly in the grasp of mantric drone-rockers like Loop or My Bloody Valentine. Vocalist Steve Kennedy is mixed so low in the mix as to appear almost transparent, but that just allows the densely-layered guitars to ebb and flow more prominently. 'Burning Down The House' (not a Talking Heads cover) is 12 minutes of lovely midtempo psychedelica packed with subtle drones and tones and a haunting melody underneath it all. That is followed up by the 60s-ish 'Come Up To My Cloud' which seems to channel The Byrds even, whereas 'Letting Go Of Everything' could be an homage to classic Jesus & Mary Chain, which is not a bad thing. An excellent and diverse debut that proves that Sciflyer have a bright future ahead of them.


One of the more compelling new bands I’ve heard in a while, Sciflyer’s new wrinkle on Brit-influenced “shoegazer” rock is to make it actually rock. Highlights like “You’re From the Ocean” sound like prime Husker Du armed with wah-wah and delay pedals instead of only distortion boxes. They’re also good at the more spacey, expansive guitar rock, like the trancey, 12-minute “Burning Down the House” or the beautiful midtempo tune “Letting Go of Everything.” Recorded at guitarist/vocalist Steve Kennedy’s house, his breathy vocals are mixed far too low, but the dynamic, punchy music more than makes up for that.


This reminds me a lot of My Bloody Valentine. -- PUNK PLANET


A hypnotic megatrip...a dream anthology of its own. -- SENSE


Shoegazer. Noise Pop. Space Rock. Whatever label you want to place on Sciflyer‘s sound, I would call it blissful, atmospheric, and intricate. Their music soars into the atmosphere, but it is not all unstructured by any means. There are definitely hooks and sections to their songs. I think they have found a compromise between shoegazer, atmospheric blissfulness and song structure. They have the feel of a polished rock band hidden within layered guitars and blissful landscapes. Steve Kennedy also does a great job with his subtle vocal style and space laden lyrics.

“Karma” starts out with a track that was recorded on a four track. It’s a great opener for the album and feels very lo-fi while maintaining the bands musical integrity. “Burn & Sell”, the second track, is a song about betrayal. It has a catchy hook with great effects on the guitar. It’s hard to put into words what it actually sounds like. The guitar effect reminds me of the sounds one makes while playing the comb. Lyrically, it is a song about trust, or lack thereof, in a relationship. The album really soars on the 4th track. “Burning Down the House” is an atmospheric 11:57 minute track that never gets tiring. The guitars are beautifully layered and the bass adds a very subtle touch to this song. Perfect. Lyrically, “Burning Down the House” impressed me most. “it’s cold like a mars night/way out in the sky/i’m burning my house down, so go inside/like sparks from the arc-light/when our worlds collide.” I will not venture as to what they mean, because I could not decide whether it was good or bad friction meant by the song, so, I will let you decide. Needless to say, the lyrics on the whole album are a great read and they do a service to all their songs.

The only instrumental on the album is “Alpha Centari”. It is a mid-tempo, guitar layered track. What I like about it is that it does not drag on forever (it’s only 2:32). Sciflyer seems to have a great sense of when things might become too repetitive for the listener. Even their longer songs don’t ever get boring and they hold the listeners attention with tempo changes, change ups in the melody and other more intricate musical whimsies. The disc ends in a collide of feedback and sound, echoing the tumultuous lyrical content of all the previous tracks.

This disc is a solid effort. It’s thematic lyrics and strong song structures really give cohesion to the whole album. I can’t wait to see what they come up with next.

Tracks 4 and 9 - Basic tracks recorded by Ben Lund at Insta-Fame, Portland, OR -- Overdubs and mixdown done on analog 8-Track tape at Area 52 by Steve Kennedy.

Bandcamp Daily  your guide to the world of Bandcamp